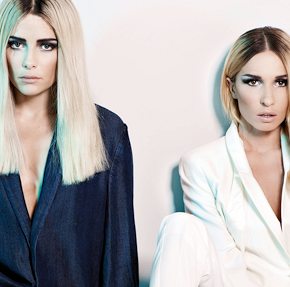 Rebecca and Fiona are one of the many popular Swedish DJ acts in the industry. Promoters are booking Rebecca and Fiona for their high energy shows, and great music that they have been releasing. The girls were also featured on the popular Kaskade song “Turn It Down”.

The girls released their first single “Luminary Ones” in 2010, and it ended up being one of the most popular songs in Sweden. The single lead to venues in Sweden setting up a Rebecca and Fiona booking as the song would spread around the club scene. Eventually the popularity of the group would lead to them touring as an opening act on the Robyn tour throughout Europe. The group was quickly making a name for themselves, and the Rebecca and Fiona booking price would start to go up. The girls would get their own TV show, which pushed their name even more into the spotlight. They would release the single Bullets which would go double platinum. The girls would continue to do even more touring and released their debut album I Love You, Man.

Rebecca and Fiona continue to grow into one of the most popular acts in Electronic Music. The girls have played alongside some of the top DJs like Steve Angello, Kaskade, and Tiesto. The acclaim would only continue when they received a Grammy at the Swedish Grammy Awards for Best Electronic Dance Act. Venues are getting Rebecca and Fiona booking info as they are quickly becoming one of the top world acts to have at their events.

When you are ready to book Rebecca and Fiona for your event, we are here to assist you in helping to make your event a success. The girls are quickly becoming one of the top DJs, and will surely put on a great show for your attendees.