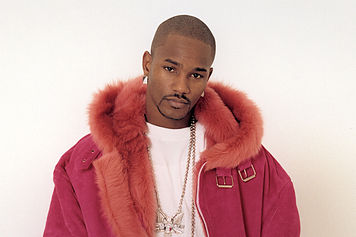 Camron or Cam’ron also known as Killa Cam is the head of the popular Diplomats crew, and responsible for putting Juelz Santana and Jim Jones on the map. When promoter’s set-up a Camron booking, they know that they are going to get a stream of hits that start from the 90s and go into the 2000s. Camron is simply a legend in the game, and the Harlem rapper is one of the most influential rappers to ever come out of the neighborhood.

Camron was born Cameron Giles and is from Harlem, NY. In his early days, he was known for his basketball skills more than his skills as a rapper. He would go to school with popular rapper Mase, and rap partner Jim Jones, and he would rap with them in school. He would go to college for playing basketball but this didn’t last long as he dropped out to go back to NY. When he got back to New York, he joined a rap group called Children of the Corn that featured Mase, Big L, and his cousin Bloodshed. The group would release mixtapes, and began to build a buzz for themselves on the underground, everybody began checking for the crew. The group would break up when member Bloodshed was killed in a car accident in 1997. Cam’ron began to embark on his solo career, and Mase would introduce him to Notorious BIG, and this led to Camron meeting Lance Riveria who signed Camron to his label Untertainment. The already buzzing rapper began to prepare for the release of his debut album, and promoters started getting Camrons booking information so they could start preparing to book him for shows. He released his debut album “Confessions of Fire” on July of ’98 and he released singles “3-5-7” and “Horse and Carriage” which featured rapper Mase. The former reached the top 10 of the R&B charts, but failed to crossover into the Top 40. The album would eventually go gold, and it led to the Camron booking price going up, off of the popularity in the streets of his songs.

It would be 2 years before Camron would release another album, and this time he linked up with music exec Tommy Mottola to release his album on Sony/Epic records. He would release the album “S.D.E” on the label, and it would come with features from the young Juelz Santana, Jim Jones, and NORE. The album included the fairly popular singles “Let Me Know” and “What Means the World To You”. The popularity of these songs led to more Camron booking throughout the U.S, and it saw the album hitting number 14 on the Billboard 200. Camron was popular within the streets, but he had yet to completely crossover. This problem would soon change, as he was about to make a big career move that would take his career to new heights.

Camron was released from his deal with Sony/Epic Records, and he would sign with his childhood friends label Roc-A-Fella Records. The label featured other popular rappers like Jay-Z, Memphis Bleek, Beanie Sigel, and Freeway. The new partnership would lead to Camron releasing his most successful album “Come Home With Me”, and it featured a stream of hits. The album featured hits “Oh Boy” that his the Top 3 on the Billboard 100, and “Hey Ma” which was also another huge hit. Both singles featured his protégé Juelz Santana that people started to take notice of after him being featured on the singles. The album went platinum, and it would result in the Camron booking fee instantly going up and him doing big tours across the U.S. After the popularity of the album, Cam’ron would work on the release of his group’s album “Diplomatic Immunity”. The album featured hits like “Dipset Anthem”, and “I Really Mean It” which were popular in the streets. The album would be certified gold and it also helped continue to put the spotlight on his crew, particularly Juelz Santana who began to get a bigger buzz around this time. The next year, the group would release a sequel called “Diplomatic Immunity 2” that wasn’t as popular as the previous album but still managed to go gold.

After putting out releases with his group, Cam’ron began to work on the release of his next album “Purple Haze”. The album would feature rappers Kanye West, Jaheim, Twista, and and Juelz Santana. The album had a hit with “Down and Out” which featured Kanye West, and critics also acclaimed the album. The album went gold, but didn’t meet the expectations of what was expected from a sales perspective. Nevertheless, venues still booked Cam’ron for shows throughout the U.S, and he was still one of the most popular rappers from New York. He would ask to be released from Roc A Fella after his album didn’t do the number that he was expecting and he would sign with Warner Music Group for his next album.

He released his next album “Killa Season” in May of 2006, and even though it sold over 100,000 copies in the first week it ultimately didn’t even go gold until much later. The album would be the beginning of things starting to slow down for Camron, and after the release of this album he pretty much went on a 3 year hiatus from music. The Cam’ron booking price would go down as people hadn’t heard any new music from him and were relying on him to perform his old hits for his hardcore fans. He eventually popped back up on the scene and he would release his album Crime Pays, which introduced the world to producer AraabMuzik. The album would be his worse selling album of his career, and it would lead to him taking a break from releasing another solo album. The booking cost for Camron remained steady at this time, as there were no new hits coming from him.

Camron and the rest of his Diplomats crew announced that they would be releasing another album, and this lead to them getting booked for shows throughout the country as people were excited to hear this. Meanwhile, Cam’ron is currently working on the release of his next album “Killa Season 2”, which is set to feature rappers Wiz Khalifa, Nicki Minaj, and many others. Its not surprising that people are wondering how much it is to book Camron, or even how to book Camron because they know when he does a show that he will have a stream of hits to go through. Yes its true, that he doesn’t have any recent hits but he does have a dedicated fan base that will come out and support him for shows.

When you are ready to book Cam’ron for your show, let us know and we are here to work with you and see how we can help make your event a success.